So Ms. Foodie was talking to a fellow Foodie friend, who can throw down in her own right, and we were discussing how some of these recipes labeled “easy” are anything but.  How many of you keep endive on the regular in your fridge?  My Foodie friend agrees.

Hence my giving up on the erroneously labeled “easy chicken drumstick recipes” on the Internet to create my own.  Would you expect anything less?

I began with the marinade: Worcestershire, Pineapple juice, lemon pepper, lightly browned butter, and a bit of orange in any form: a 1/4 cup orange juice, canned mandarin oranges, or the navel variety, freshly squeezed.  We just happened to have some of the latter lying around, so I went with that! 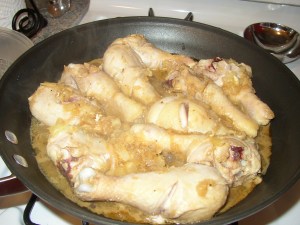 I cut two 1/4-inch slices into the meaty part of the drumsticks, so that the full flavor could sink in, then threw them in a bowl with all the aforementioned ingredients.  I always add the browned butter last, so that it won’t solidify too quickly.  Put it in the fridge for 15 minutes or so to let the flavors settle–quick and breezy.

While the meat was marinating, I attended to the side dish:  Fruity Jasmine Brown Rice.  I’m not a huge fan of the Brown, but it is healthier, and the Jasmine variety seems a bit mellower and less grainy than its long-grain counterpart.  I also cook it in a rice steamer with part water and part chicken broth, to further mellow it.  Then to fruit it up, I added that remaining pineapple juice and some fresh cranberries, which burst with flavor upon cooking!  Cranberries freeze well, so they are a regular part of my store.  You can substitute dried cranberries or a dried (or fresh) fruit of your choice. 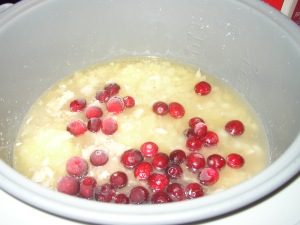 And for my veggie, those sprouts from Brussel, steamed to perfection.  For those who like the health benefit, but are not fond of the bitter, pour any cooking vinegar (rice, balsamic, red wine) over the sprouts before you steam them–totally cuts it out.

With the meat good and soaked with the marinade, I threw them in a non-stick skillet, covered, and cooked over medium heat.  Turning them halfway through cooking keeps the flavors evenly distributed.  Drumsticks generally cook within 20-25 minutes.

All the subtle fruity goodness makes this dish most Delish!